Why's Everyone So Worked Up About UVA? | Bookbyte

Why's Everyone So Worked Up About UVA? 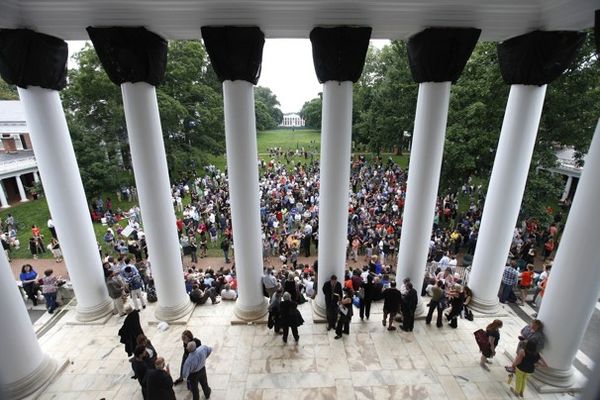 You might have seen a few headlines here and there over the past few weeks about the University of Virginia. Specifically, about the massive uproar and student protests over the ousting of President Teresa Sullivan.

I'm from Virginia originally, so I noticed the headlines but didn't think too much of them at first. The firing of a school official didn't worthy of national news. My fiancee, who's a UVA alum, felt the same way (at first). But the headlines kept appearing. And other UVA alums I knew were posting their outrage all over Facebook. So I figured it was time to see what was really going on. I tried, but the first few articles I read seemed written just for the already informed. The only background information I received was that Sullivan was abruptly and unceremoniously forced out, despite the fact that she was generally beloved.

My fiancee had an old classmate fill her in on the general idea, and I've been reading up on it as much as I can as well. Like all great stories (and like how the Supreme Court decides what cases to hear), the Sullivan ousting is news because it's about much more than what's on the surface. Once I found out what that bigger issue was, the story became much, much more interesting.

Here's the bare-bones version: UVA, like many public universities, is governed by a Board of Visitors. It goes by different names in different states, but the general idea is the same: a board of officials appointed by the governor to oversee the school and make sure it's adhering to the general principles of the state's education policy. Note that these people are often not educators, as is the case with most of the officials in Virginia, but people who are well-connected enough to get the governor's appointment.

So the rector and vice-rector of this board -- Helen Dragas and Mark Kington, respectively -- read a few articles, heard a few speeches, and started discussing the benefits of a more online-focused approach to education, concluding that they could spend less, make more, and stay "with the times" by reshaping UVA into a more prestigious University of Phoenix, basically. The idea circulated among the board members and the board agreed to enact this new idea. But President Sullivan was skeptical. She said:

"There is room for carefully implemented online learning in selected fields, but online instruction is no panacea. It is surprisingly expensive, has limited revenue potential, and unless carefully managed, can undermine the quality of instruction."

Sullivan was forced out a few days later, though a record of emails indicates that Dragas and Kington had been planning the change earlier than that.

So there's two different directions the outrage can go when discussing this story:

The first is just a general policy problem, and isn't so much about schools as it is about politics. So I'm going to leave that one alone for now. The second, however, is very interesting, particularly to my generation, which generally thinks of ourselves as digitally native, but still has clear memories of rotary phones, floppy disks, and library card catalogs. (I'm 27, if you're trying to guess.) Open and widely available education is the way of the future, certainly. But does that devalue a traditional, four-year, living-in-a-dorm, attending-lectures-and-seminars college education?

I'll revisit the topic in a later article, when I can spend more time on it. But in the meantime, what do you think? Who benefits the most from online education, the schools looking to cut down on costs or the students who gain a cheaper alternative to a traditional education?