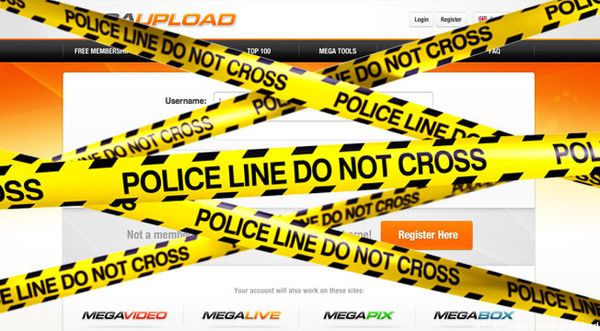 Where do you save your files? I mean the really important ones. Ones that you couldn't afford to lose if your computer went kaput. Do you have an external hard drive? Do you stash them in a cloud service like Dropbox? Or do you just keep them in "My Documents" and hope that nothing bad ever happens to your CPU?

Kyle Goodwin tried to do the responsible thing and back up the videos for his business OhioSportsNet, a company that creates highlight reels and documentaries on local high school athletes for prospective colleges. But he made the mistake of entrusting them to the recently FBI-raided file-sharing site Megaupload. When the government locked down Megaupload, they also locked down Goodwin's access to all his files.

To make matters worse, Goodwin's hard drive crashed shortly before the raid. Everything was either lost or turned into evidence for a copyright infringement case against Megaupload. Remember, this is all footage that customers were paying him to film and edit. No copyright infringement here, just a man getting punished for using the wrong company.

You could say that Goodwin should've known better than to trust a seedy website with important business files. I'm going to assume that Goodwin had never heard about Megaupload founder and CEO Kim Dotcom. (Yes, he did legally change his name to "Dotcom." I can see it on an XFL jersey now.) Because even if he didn't know that Dotcom had initially earned his millions off insider trading and embezzlement, a picture of the human-doughboy hybrid should be more than enough info to know just how classy of an operation he was running. But even if Goodwin's decision was shortsighted, it wasn't wrong. He certainly doesn't deserve to lose his business over this one bad call.

I've got no sympathy for Dotcom, but plenty for people like Goodwin. And unfortunately, there will probably be a lot more people like him caught in the crossfire as the government tries to regulate the Internet to shut down piracy.

On our old blog, I wrote a lot about SOPA (Stop Online Piracy Act) and the many, many problems with the way its broad definition could incriminate a lot of innocent people. Fortunately, the strongly vocal opposition to the bill forced it to fizzle out. But there's a new, similar bill in Congress now called CISPA. It allows for information sharing between the government and companies in the name of security. It hasn't yet generated the sort of outrage SOPA did, but its opponents are complaining about the same thing: The language is too broad to work as a policy.

I'm definitely not one of those Guy Fawkes-masked Anonymous types. There needs to be some level of regulation on the Internet to protect owners of intellectual property. But even when lawmakers mean well, they always seem to get the details wrong. I really believe that SOPA and CISPA aren't intended to actively trample your rights, they're just written by people with a terrible understanding of how the Internet works.

A lot more time needs to be spent figuring out how to punish the Kim Dotcoms of the world without hurting the Kyle Goodwins in the process.