Every once in awhile a final comes around that just plain kicks you in the butt, no matter how long you've prepared or hard you've studied. Here are the Bookbyte team's worst finals experiences.

My worst final was my hardest, but not necessarily the one with the lowest grade. One of the projects I had for a Layout class was to design and produce a magazine, with each person in the class in charge of one spread. I elected to be editor of the magazine and spent many long days in the computer lab making sure that the magazine was taken care of. We went through countless rounds of revisions, and since I was in charge, I had to be there the whole time. I'm pretty sure I had several 12+ hour days, working on it between my classes and my job. I barely remember sleeping. It was such a relief to be done with it at the end of the term!

My worst final goes back to high school. While I definitely took harder tests in college, this was the only time I gave up in the middle of taking something. It was the AP Government exam. Our teacher was close to retirement and had totally checked out. He would cut out early almost every Friday afternoon to play golf. His classes often started on the topic of government but would drift off into college sports or unrelated life advice. Needless to say, I learned almost nothing, and this was largely reflected in the answers on my test. I finally snapped when I reached a question that said: "Define the term 'logrolling,' in the legislative sense." I wrote: "Logrolling is the process by which lumberjacks transport timber downstream." 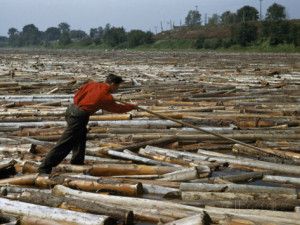 By far, the worst final I ever had to take was in the one and only online class I took while in college. It was my Statistics course, the last math requirement I had to take, and we simply had to have everything completed by x date by 9 am. Well, I decided to wait it out and take care of the other classes that I perceived to be more important and not do any studying or reading. So in the span of six hours I had to take 12 quizzes, a midterm and my final. After each quiz and test, I would get my score and my cumulative grade would show so I could see my progress. I finally completed all the quizzes and the midterm at about 4:30 am with four and a half hours left before the deadline. But I'd still need to ace the final in order to get an 'A'. I decided to sleep for two hours and then just try to crank out the final. It was the epitome of cramming, procrastinating and sleep deprivation all coming to a head. I'd never felt so satisfied with getting a 'B' in my life!

I took a course in Conservation Biology one year, but the professor who normally taught the course wasn't around that year. So, instead. it was covered by a professor who wasn't too familiar with the subject. During the course, he omitted a ton of stuff from the original professor's lesson plan. But during the final, he still used the original professor's final word-for-word. Meaning everything he omitted from the lesson plan still showed up on the final. Everyone failed it.

The worst final exam I have ever taken was for my Comparative Vertebrate Anatomy course. I was the only student in the large class who was not a biology major or pre-med (I was an English major at the time). I was way out of my element, so I had to accept that I would be at a constant disadvantage. It was bloody hard work, especially for just a damned elective, and I found myself in a grim state of mind during dead week as I faced a final exam unlike any I've taken before. Before me was the prospect of learning the Latin names, origins, and insertions of >80% of a cat's muscles, and I had to demonstrate this ability by locating them with tiny pins on the lab specimen I had meticulously dissected over the last month. It seemed an impossible task. I was in the class only because I thought the evolutionary history of vertebrates was 'cool'.

What did I do? Something out of character: I studied with a classmate. Hitherto I had never studied socially, but I was in over my head and I reluctantly agreed to host a study session with a nice girl who sat next to me in the lab. I felt a weird confidence rising in me after hours of her pedagogic scoldings, and after the intense, collaborative study session I had none of the pre-exam angst that had been haunted me. The fear of abject failure had been replaced with a confidence bordering on arrogance.

How did the exam go? It went well. Very well in fact, better than many of those pre-med kids and biology majors.

It was the worst final exam I have ever taken because it was my first experience with exam-induced fear so demoralizing that it causes paralysis and extinguishes any hope of (academic) survival. But, it was the best exam I had ever taken as it taught me that, with a friend to help me along, when the scholastic shit hit the academic fan I could duck & roll and come up swinging. The caffeine helped too.