The Finest Acts of Wikipedia Vandalism

It's nothing short of shocking that Wikipedia is as useful, functional, and accurate as it is, considering the incredibly high potential for sabotaging edits. Instead of having a scholarly Encyclopedia Britannica-style essay or a random collection of gibberish, we have both, where you can occasionally find an insane gem hidden in the otherwise staid article. Here are a few of the best of those insane gems.

(Always remember, college students, Wikipedia is not an acceptable citation, but it is a pretty great springboard for primary sources. Scroll down to "References.") 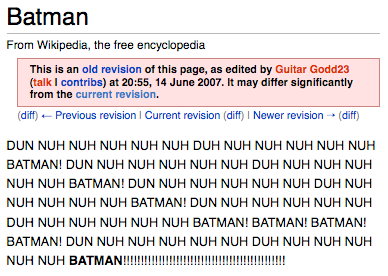