Spooky Ghost Stories to Give You Goosebumps | Bookbyte

Spooky Ghost Stories to Give You Goosebumps


These eerie tales and unsolved mysteries are based on true stories that have been twisted by time into legends most terrifying. From a slit-mouthed spectral woman asking for praise from lone travelers (at the risk of getting slashed!) to the most famous haunted house in history, these stories are sure to delight as much as they frighten.

Gather a group of friends for spooky story time! Set the mood with candles and creepy music, and have everyone draw in real close so they can hear these hair-raising tales of things that go bump in the night.

Have you seen the move, The Blair Witch Project? Meet the vengeful witch who inspired the movie. The Bell Witch may not have much in common with her onscreen counterpart, but her story is definitely just as chilling since it's never been disproved!

The Bell Witch terrorized John Bell, a North Carolina farmer, and his family for years during the early 1800s. Said to be Old Kate Batts, a woman with whom John Bell had a falling out with over the purchasing of some land, Old Kate swore on her deathbed she would haunt Bell and his family and was apparently true to her word.

The Bell Witch, as she came to be known, was especially malicious to John Bell and his daughter Betsy, throwing furniture and dishes at them, pulling their hair, pinching their skin, yelling at night to keep them from resting. The Bell Witch became so popular, she even caught the attention of General Andrew Jackson (you know, the man on the twenty-dollar bill?), who traveled to the Bell farm to see the haunting for himself. After a night of listening to the screams of Betsy and his own men who were ceaselessly pinched and slapped, and having his bed covers constantly ripped from him, Jackson was quoted as saying, "I'd rather fight the British in New Orleans than have to fight the Bell Witch."

After years of tormenting the Bells, the witch finally had her revenge. John Bell's health deteriorated until one morning, he was found in a stupor on the brink of death. When they checked the medicine cabinet, the family found Bell's medicine bottle had been replaced with a strange vial that had never been seen before. Apparently the witch spoke up to take credit for the death, and laughed and shrieked gleefully at Bell's funeral.

The witch moved on from the house to a cave on the former Bell farm along the Red River, where strange phenomena and sightings are still said to occur. 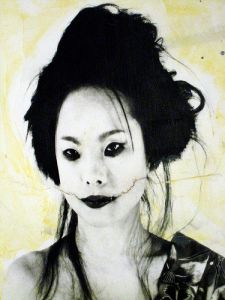 Japan has a long history of creepy ghosts, monsters, and urban legends. One of the most disturbing is known as Kuchisake-onna, or "The Slit-Mouthed Woman." According to legend, during the Heian period there was a beautiful, vain woman who cheated on her samurai paramour. When he found out, the samurai sliced her face from ear to ear and asked, "Who will think you are beautiful now?", before murdering her.

At this point, saying "yes" or "no" would not save the person from a face slashing before being killed. However, confusing the eerie woman by saying "average" or "so-so" when questioned after she lifts her mask could give a person time to run away while she pondered the ambiguous answer. Saying "I have a previous engagement" would apparently remind the specter of her manners and she would politely apologize and leave.

Although it's difficult to determine the truth of this rumor, a story surfaced in 1979 of a woman with a torn mouth seen chasing children around before she was hit by a car. People were so freaked out, schoolteachers walked their students to their homes. The legend of Kuchisake-onna resurfaces in Japan every few years, and it has inspired novels, manga and horror films.

Have you heard the story of the beautiful woman who cries, looking for children to drag into a watery grave? La Llorona (pronounced LAH yoh ROH nah) is a famous Mexican ghost story about a beautiful woman who loved to dance and party in the village. The legend goes that she felt like her children were holding her back from the life she wanted, so she drowned them in the river by her house.

After she died, the woman was not allowed into Heaven, being told she must find her children and bring them with her if she wished to enter. Now she's cursed to walk the earth, eternally searching for the children she drowned so long ago.

Many people in South America and Mexico claim to have seen La Llorona at night, walking alone and weeping. Parents have added to the tale in order to keep their children from playing outside in the dark, telling little ones if the weeping woman sees them, she'll drag them into the river to a watery grave. 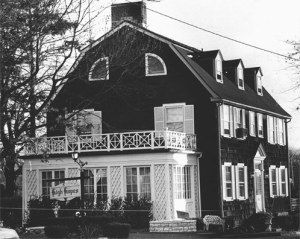 This one's an oldie but goodie. The chilling story about the Lutz family and their haunted Long Island home is sure to raise the goosebumps on your skin. George and Kathy Lutz, along with their three children and family dog, moved into a home where just 13 months earlier a man had shot and killed six members of his family.

Apparently during their time at the house, the family experienced a number of terrifying occurrences. When George and Kathy learned of the murders, they had a priest come into the house to bless it. The priest reported that as he was blessing a room, he heard a voice tell him to "get out," even though he was alone. Since he hadn't told the Lutzs of the strange occurrence when it happened, he phoned to alert them of the incident but was cut off by static before he could issue his warning.

This was only the beginning of the nightmare they were to experience. George Lutz said he would wake up around 3:15 every morning to check the boat house, which he later learned was the time the murders took place. George found a small hidden room behind shelving in the basement that was painted red, was missing from the blueprints, and that the family dog would cower away from. Their 5-year-old daughter found an imaginary friend, Jodie, who appeared as a demonic pig-like creature with glowing red eyes when George and Kathy would glimpse it.

Many more instances, including door slamming, putrid smells, and cold spots plagued the family until they had enough and moved out 28 days later.