"In each case, drivers took about twice as long to react as they did when they weren't texting," Christine Yager, who headed the study, told Reuters. "Eye contact to the roadway also decreased, no matter which texting method was used." 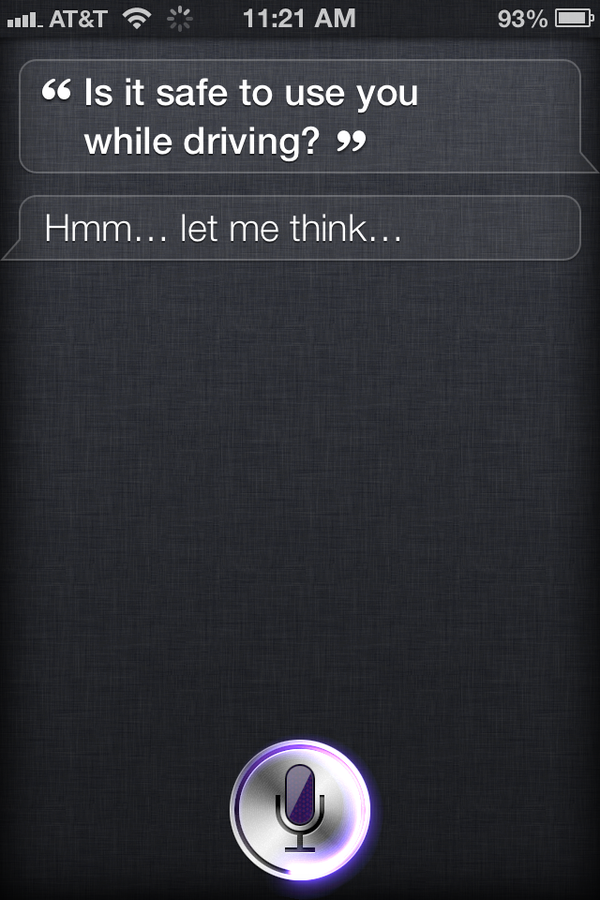 Now, being distracted behind the wheel is obviously a serious problem for a lot of drivers, so I don't want to cast doubt on the accuracy of the study, especially if it could save a few lives. But I do have to take some of the conclusions with a grain of salt. There are two other things Yager said, one I totally agree with, one which I'm not so sure.

The biggest concern is that the driver felt safer while using voice-to-text applications instead of traditional texting, even though driving performance was equally affected, she said.

This may lead to a false belief that texting while driving using spoken commands is safe when in reality it is not, Yager said.

This part makes perfect sense to me and seems to me like the most important thing to take home from this study. If drivers are just as unsafe using voice-to-text software as thumb-typing, it's not because of the inherent danger in using a mobile device, but because of a misplaced confidence boost. Drivers need to be educated and disciplined enough that they keep their focus on the road. As terrible an idea as texting while driving is, only the most reckless of reckless drivers wouldn't be aware of how dangerous they're being while they're doing it. Maybe that actually leads to an extra layer of caution drivers using voice-to-text don't have.

"You're still using your mind to try to think of what you're trying to say, and that by proxy causes some driving impairment, and that decreases your response time," Yager said.

While I'm not doubting this from a technical perspective, I'm not sure what conclusions we're really supposed to take away from this. I mean, I use my mind all the time while driving. It's how I keep from dozing off during my hour commute into work. I listen to music or audiobooks. I think about stuff I'm going to do that day. I daydream. If I have a passenger, I talk to them. But if something comes up that requires my unbroken attention, I'll stop doing those things and refocus.

I guess I'm just not entirely convinced that all types of distractions are inherently bad. There has to be a benefit to keeping your mind active while doing a monotonous activity.

Everyone needs to remember how new and unpolished this sort of technology is. As it gets better and as we get more comfortable using it, there will be less fiddling with the device, less need to make corrections and less false confidence that it's 100% safe. Then our phones will do a better job of helping us get through a long drive instead of distracting us.