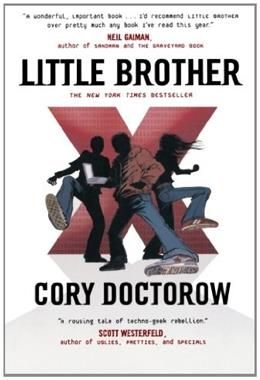 Until recently, a Florida high school had a summer reading program that had everyone in the school, regardless of grade level, reading the same book. However, the school's administration canned the program over the content of this year's book, Little Brother by Cory Doctorow.

The reasoning is a bit odd. The school, or at least, the librarians and English teachers responsible for actually reading the book and writing discussion materials for the students, vetted it and found nothing inappropriate about it. The plug was pulled at the last minute by the school's principal, who's reasoning seems to be primarily based on online reviews. Those reviews mentioned that the book had a "positive view of questioning authority" and "lauding hacker culture." The principal also said that he had received parent complaints about profanity, though the author insists the only profanity is one indirect reference.

(Even if the book was foul-mouthed, let's all just admit that shielding 14-18-year-olds from naughty words is a losing battle. Personally, those were my peak cursing years.)

Doctorow and his publisher, Tor, have decided to respond to this by mailing 200 free copies to the school, along with keeping an originally scheduled video conference to discuss the book with any students who are interested. The reasoning, in the author's words:

I don't think this is a problem because my book is the greatest novel ever written and the kids will all miss out by not reading it, but because I think that the role of an educator is to encourage critical thinking and debate, and that this is a totally inappropriate way to address "controversial" material in schools.

That sentence sums up the issue better than I ever could. We talk about censorship a lot of this blog, so I feel like I'm beating a dead horse every time I write about the topic. Still, these stories keep coming up. Schools and parents keep wringing their hands over what's appropriate for young people to read. And every time, my reaction is the same: Have a little faith in the reading comprehension of young people.

As far as I'm concerned, there's no better endorsement for a book than someone trying to prevent you from reading it. (Though getting a recommendation from Neil Gaiman on the cover, as Doctorow did, is pretty darn close.) We have a few copies left on our site at the moment if you're interested.