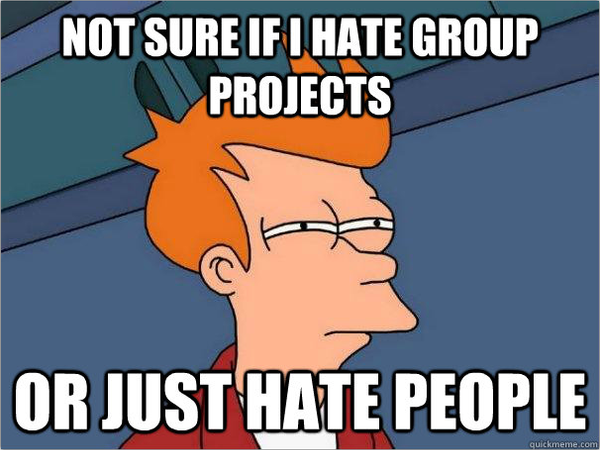 Leaving aside the stuff about socioeconomic status, how true is this? Do colleges do a better job at teaching individualistic students how to succeed than collaborative students? Do students even want schools to focus more on collaboration?

Before any hard research, I asked Google its thoughts. When I typed "college group assignments" into Google, this is the headline on the first hit I get:

Well that doesn't bode well. Let's try "working in a group college". The second hit was:

Yikes. Let's see what the slightly deeper research turns up.

From a UConn study titled "Levels of urgency and attitudes toward group experiences":

Student attitudes toward group work are often cynical and pessimistic due to a history of repeated negative experiences...

From a Concordia University study titled "How do students really feel about working in small groups?":

Various group dynamics operate that undermine the effectiveness of the cooperative approach, such as negative attitudes toward group work and student behaviours that are counter-productive to group success.

[I]t is common for students to not enjoy group work...

Right to the point.

So there's clearly a pretty big contingent of people who do not want Professor Nicole Stevens' recommendations come to pass. Or if they do, they want to be able to opt out of it.

Yet regardless of individual students' feelings about group work, there is no denying that it is an essential part of the skills gained from college. No matter how excruciating it is to be paired with a group member who won't pull his or her weight, who won't compromise on disagreements, or who micromanages every little detail, group work gives you a much more accurate preview of work after college than independent work. Naturally, most people don't want their grades to be at the mercy of an unmotivated group member. But considering most college graduates will not be independently employed, knowing how to work effectively in a group might be a more useful skill than to know how to go it alone.

So maybe the solution is to look at how we structure group projects. It will take educational minds greater than mine (that is, minds that have taken at least one education class) to build something that both challenges students to collaborate outside of their comfort zone and prevents them from feeling cheated by being paired with lousy teammates. But it's necessary to find that balance to prepare students for their professional lives without discouraging them.