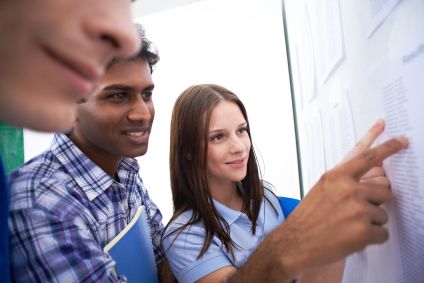 Mapping out your college schedule is always a tug-of-war between short-term and long-term gain. You don't want a schedule that's too hard or too easy (because that just means you're putting off the hard schedule for later). You need to keep in mind the delicate balance between core requirements, credits for your major, and electives. Even if you map everything out in advance, your best laid plans could go awry when the classes you were eyeing all get scheduled at the same time.

When I was an undergrad, I developed a strategy early and held fast to it for the remainder of my four years: Try as many things as possible, avoid commitment as long as possible. First, I didn't declare my major until the last possible minute. This was for two reasons: (1) I wanted as much time as possible to try everything first. (2) At my school, if you entered declared, there were certain freshman year required intro classes. Declare later and you could skip those, leaving more time for more interesting material.

The other piece of my long-term strategy was knocking out core requirements as quickly as possible, trading a comparatively tedious first year for more freedom down the road. It mostly worked out well, especially since I decided to go for a double major by the end of my sophomore year, so I needed all the room I could get credits for two majors before the end of the four years.

While the plan worked to a point, I made a big mistake by not leaving myself any wiggle room to do things on a whim. This screwed me out of a number of courses that needed to be taken sequentially. Since I'd eaten up my first two years with checking off the essentials, I didn't leave myself much time to work up to some of the higher-level courses in my majors.

The second mistake was more tragic. My Medieval Lit course was run by a Prof. Wilson. Easily one of the best instructors I've ever had. He spoke seven languages (half of them dead ones). He could recite the first 100 verses of Beowulf from memory. In Old English. He was the sort of professor who could go off on tangents and loop them back around to the main topic. He could bring current events into a discussion of Pilgrim's Progress and make it feel organic. He was passionate about what he did and you could feel it every time his class met. (For your mental picture, he might have been played by Richard Attenborough.)

When Prof. Wilson announced he'd be teaching a course called Heroic Literature, I couldn't believe I could get credits for something so tailor-made to my interest. It would be a cross-cultural examination of the idea of literary heroes. It was a course of his own design, so no one else in the department was really qualified to teach it.

But I had my strategy, so I held off, opting to take it next time it came around so I could take care of more boring stuff first.

Near the end of the semester, Prof. Wilson was nowhere to be found. A few other professors in the department took over his classes for the remaining weeks. Eventually, word leaked: Prof. Wilson had a particularly aggressive form of cancer. He was diagnosed in November and passed away shortly after the New Year.

I wish I'd taken more classes with the guy. I wish I'd thrown my plans out and just gone with my gut. But I didn't.

That's my advice to anyone mapping out plans for the future. Not just for college, but for anything in life. If there's something you truly want, go for it. Never put off the things you're most passionate about. You never know if the only day is today.