Are Our Fictional Futures Too Bleak? | Bookbyte

Are Our Fictional Futures Too Bleak? 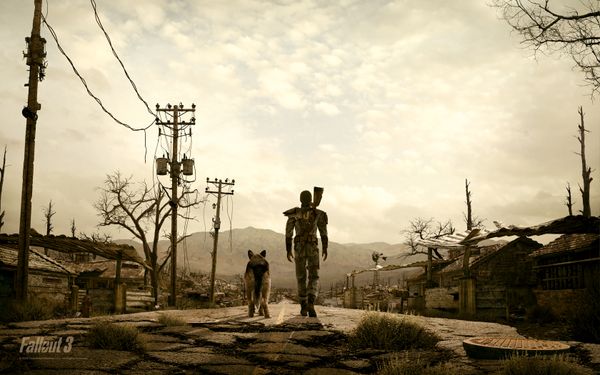 Author Neal Stephenson has decided that we all need to stop being so negative. He complains that modern science fiction—books, movies, etc.—is overstuffed with the apocalyptic and the dystopian. He thinks that what the world really needs is an optimistic vision of the future, one that can give the world's inventors a little inspiration.

And, well, he's not wrong. The Hunger Games made dystopian novels a hit among the young adult audience. Thanks to games like Fallout and movies like The Book of Eli (or even The Road Warrior, if you want to go further back), pop culture now has an established visual shorthand for a post-nuclear apocalypse. (See the picture above.) The most recent novels from Cormac McCarthy and Kazuo Ishiguro, The Road and Never Let Me Go, took a more "literary" approach to apocalyptic and distopian fiction, respectively. And how many recent sci-fi stories involve the world falling apart because of zombies (The Walking Dead, World War Z, Zombieland, 28 Days Later, Resident Evil, Pride and Prejudice and Zombies, just to name a few)?

In fact, there are only two major science fiction universes I can think of that are as positive as Stephenson wants. The first is Star Trek, which has already helped imagine the creation of things like cellphones, flat screens, and bluetooth headsets. The second is Mass Effect, a series of games that are basically the spiritual successor to Star Trek, in that they also imagine a future of more-or-less peaceful interaction between alien races, a UN-like central alliance between powers, and major technological leaps forward (not just in terms of warfare).

If there is a tendency for writers to always lean towards the bleak, I can understand it. After all, everybody loves a scrappy underdog hero. Since science fiction gives its writers the freedom to imagine any universe they want, why not imagine one where the odds are impossibly stacked against the hero? Make the hero face off against an oppressive autocratic government, overpowered alien invaders, swarms of the living dead, or a dying planet. You've immediately established the high stakes of this life-or-death universe. You can fill an entire movie or book just following the hero's fight to survive. Then you can save toppling the government, driving back the aliens, curing the living dead, or rescuing the planet for the sequels.

But I do want to slightly qualify Stephenson's complaint. I don't think you necessarily need a bright and shiny vision of the future to help inspire. Inspiration can come from the darkness as well. While McCarthy's The Road details the day-to-day struggles of a man and his son after an unnamed event has spoiled the planet forever, I actually found the whole thing much less of a downer than, say, Blood Meridian, McCarthy's surreal and gory tale about bounty hunters on the Mexican border. That's because The Road was primarily focused on the father-son relationship. That sliver of gentleness and hope, however slight, softened the rest of the story. It's inspiring in its own way, even if it's not imagining a bright future.

I think Stephenson's real complaint isn't so much the lack of optimism, but the lack of imagination. The problem with a glut of zombie stories isn't that it's depressing, it's that it gets to be tiresome. The story can still be worthwhile if it tries to do something different. World War Z works because it takes a worldwide view, seeing how society (rather than a handful of survivors) responds, adjusts, and contains the outbreak. The book uses the idea of a specific genre as a springboard for bigger ideas. It creates a thought experiment and tries to reason out how society would work through it. Even if the book isn't imagining futuristic advancements per se, it's still imagining progress of a kind, theorizing how the world would react to a giant-scale viral outbreak.

That's probably the most important role of science fiction -- asking questions and imagining big. H.G. Wells' The War of the Worlds had the "big" idea of a powerful and advanced army being wholly unprepared for Earth's microbial invaders. Isaac Asimov's I, Robot had the "big" idea of establishing a moral code for artificial intelligence. Philip K. Dick's We Can Remember It For You Wholesale imagines technology that can implant memories, then, with a few clever plot twists, illustrates how impossible it could be to tell fiction from reality. I don't know if I'd call any of these stories "optimistic," but I think they still accomplish what Stephenson is asking for.

If that's what he's saying, then I'm on board 100%. I fully support allowing science fiction to be as open-ended and freely imaginative as it can be.